Most concrete contractors would rather spend their time and energy placing concrete instead of sawing lumber to brace forms, only to end up tossing out the wood bracing after a couple of uses. That was certainly true for Tim Colatruglio, a third-generation concrete contractor from Ohio. A few years ago, when he was working with his father placing concrete perimeter walls and curbs for apartment complexes, he got fed up seeing so much discarded lumber at the end of the day. By the time we were done with a job, we had accumulated a tremendous amount of waste lumber used for form bracing. I thought: There has to be a better way, he says.

Colatruglio decided to invent that better way himself, developing a reusable steel form brace called the Adjustable Kicker. He unveiled his patented bracing system at the World of Concrete in 1999. Since that time, the ingenious bracing solution has been used by concrete contractors worldwide to save time, money, and labor on a variety of projects.

Originally, I designed the Adjustable Kicker for use on smaller-scale slab-on-grade jobs, but new markets have opened up, particularly stadium risers and bridge deck work, says Colatruglio, who has received orders for the brace from as far away as Australia and the North Pole. In fact, within a year after the bracing system hit the market, it was used by Taylor Ball Construction to pour about 11 to 12 miles of stadium riser seating for the Kansas City International Speedway, one of the biggest applications for the brace to date. Jerry Stafford, senior project manager with Taylor Ball, claims the system resulted in an overall savings of about $70,000 and 2,200 man-hours. 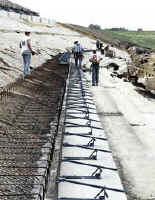 The Adjustable Kicker's versatility and ease of use are what allow contractors to achieve these impressive savings. The brace attaches to either plywood or steel forms up to 2 feet tall and can remain attached when the form is moved, making it especially efficient for repetitive forming jobs. Only the stakes or anchors securing the Kicker's 20-inch-long base must be removed. Crews can secure the base in several ways, depending on the forming application. When bracing from subgrade soil, they simply insert steel stakes into holes located in the front, middle, and back of the base. The three locations for steel stakes solves a lot of problems, says Colatruglio. For slab-on-grade pours, you can insert stakes in all three holes for better stability if the subgrade soil is loose. When doing monolithic pours (grade beams and floor slabs), you can insert stakes in just the middle and back of the base to avoid encasing the front stake in the concrete. Workers can also secure the base to concrete, wood, or asphalt surfaces by driving anchors through smaller holes predrilled into the base.

Steel stakes anchor the Kicker base to subgrade.

A recent modification to the Kicker now allows contractors to use it with flying tables for high-rise deck forms. We elongated two of the holes in the base and introduced an accessory piece a base plate with two bolts sticking up from it. You secure the Kicker to the base plate, and when it's time to move the flying form, you simply loosen the bolts. The elongated holes let you slide the form 3 inches away from the edge of the concrete so you can drop the table with the Kickers and form still attached, Colatruglio explains. He expects this newest application for the brace to save contractors a tremendous amount of time because they will no longer need to remove all the forms and bracing when moving the tables from one deck level to the next. Atlas Construction Supply, a large supplier of concrete forming and shoring systems based in California, is one of the distributors Colatruglio is working with to penetrate the high-rise market.

We're really trying to make the brace as universal as possible so it can go from the most basic slab-on-grade application to high-rise construction, and anywhere in between, he says.

In addition to its adaptability to different forming applications, the Kicker permits greater quality control by meeting tighter tolerances. Because the brace is hinged, it easily adjusts for straightness and plumbs even when used on slopes or changing surface grades. After the form is properly positioned, workers use a hand-operated cam lever to lock the brace and prevent movement during the pour.

The brace also results in less bowing of the form during the pour because it's designed to support the form at the top, middle, and bottom. When used to brace stadium riser forms, for example, the Kicker produces precise wall lines; you don't see any bulges where the concrete pushed out the form. It makes for a more professional, clean finish, says Colatruglio.

More project owners today are demanding such preciseness from concrete contractors. For the Kansas City Speedway project, specifications required the riser steps to be no more than 1/4 inch out of plumb, so bracing the forms with exactness was a top priority.

Adjustable Kickers are currently being used by Morley Construction to form the riser seating for the Home Depot National Training Center, located just outside Los Angeles. Set to open in June 2003, the $130 million facility will accommodate multiple sporting events, including tennis, soccer, track and field, and summer training camp for the San Diego Chargers. Morley was contemplating using a gang-forming system or slip form paving for the risers, but they analyzed the costs for renting the crane and gang forms or purchasing the equipment outright and determined it would be too expensive, says Colatruglio. It was more economical for Morley to purchase the Kickers and hand form the approximately 25,000 lineal feet of riser seating required for the job. Morley also plans to reuse the braces on another large project: the new San Diego Padres Ballpark.

Although Colatruglio says that stadium seating is a popular application for the brace, it can achieve even greater efficiency on bridge deck work. It really shines in terms of efficiency and quick setup. It also makes for a cleaner, safer work area. The contractor doesn't have blocks of wood all over the place and loose pieces that can fall off the work platform.

While the Adjustable Kicker offers obvious benefits for large, repetitive forming jobs, small residential contractors are also using it to save time and money, says Colatruglio. I have a guy in Missouri who owns 400 Kickers. It's just himself, his wife, and one other gentleman working for him. Some of the smaller guys really have to watch how they spend their money. The Kicker can give them the ability to make more profit on a job or even come in at a lower bid because they can get it done faster, more efficiently, and with no waste.

Anne Balogh writes feature articles each month for The Concrete Network (www.concretenetwork.com). She is a freelance writer based in Glen Ellyn, Ill., and a former editor of Concrete Construction magazine.

Email This Article To A Friend